One hundred years after his death, Herman Bavinck studies are enjoying “a moment.” Since the translations of his four volumes of Reformed Dogmatics were completed in 2008, works on Bavinck, many of which are connected to the University of Edinburgh, have been released at a rapid pace, settling past debates on purportedly irreconcilable conflicts in his thought, and applying his work to contemporary dogmatic and cultural issues. Further translation efforts are directed at making his more occasional and briefer treatises available to the Anglophone world, even as those same works are being translated into other languages, such as Chinese, Korean, Indonesian, and Portuguese. Most recently, James Eglinton’s scholarly and definitive biography rendered Bavinck’s life into clear technicolor detail, showing us the man behind the masterful theological writings.

New scholarship and translations are being produced on other well-known Reformed theologians as well, but Bavinck has generated a rare momentum that is not easily replicable. What accounts for Herman Bavinck’s influence, and why he’s enjoying such a renaissance, is not so difficult to imagine. One can point to numerous reasons—the systematic character of his Dogmatics, the psychological depth with which he attended to matters of theological anthropology, or his winsome and irenic character, for example. But I’ll focus on just one particular characteristic of his writings: his remarkable ability to find a third way that cuts across perceived and unnecessary binaries. In a polarized theological (and political) climate, then, one finds in Bavinck an exemplary model of level-headedness, not easily swayed by the ephemeral, heated debates of the hour. In broad strokes, we can see this clearly in multiple ways.

The first way may be encapsulated by the title of Cory Brock’s recent monograph: Orthodox yet Modern (Lexham, 2020). While Brock’s work was focused specifically on Bavinck’s critical appropriation of Friedrich Schleiermacher, this commitment to confessional Reformed orthodoxy in dialogue with modern thought characterized the whole of Bavinck’s writings. In contrast to contemporary suspicions from both sides that orthodoxy and modernity exist in contradiction, Bavinck argues that the orthodox—insofar as they refuse to be separatists and are engaged in society, and thus are enjoying the benefits of modern philosophy, technology, and culture—are always at risk of denying themselves when they decry modern life as only opposed to the gospel. As Bavinck would often refrain, we are children of our time, and ungratefulness here is not only a disservice to who we are, but also to God—the same God who raised Christ from the dead is the same sovereign one who remains Lord of the modern age.

However, to embrace modern life is not identical with the embrace of modernism. Modernism in the West, in Bavinck’s view, pretends to be unbiased and autonomous, when, in fact, it is always dependent at every point on the older orthodoxy. It exists parasitically on the Christian influences that have been so dominant in the past—an argument that historians like Larry Hurtado and Tom Holland have recently reiterated. Here, it is instructive to read Bavinck’s mature address “Modernism and Orthodoxy” alongside Abraham Kuyper’s own “Conservatism and Orthodoxy”—to stand on the past is something categorically different from repristination, and to be engaged with the present is not identifiable with compromising confessional convictions.

“...the church is a transcendent good; a spiritual kingdom of God that is in antithesis with the principalities of the world.”

Today, it appears that the Reformed community still wrestles with this tension, and what one finds is a temptation toward one of two sides. On the one side is a curmudgeonly spirit that longs nostalgically for a past utopian age, that decries the present order and its culture and philosophies as simply inferior to the past. And on the other there is a progressivism that looks at the past with suspicion and haughtiness, seeing nothing there but confusion and darkness. To the former, Bavinck would argue that there was no theological utopian age, and to the latter that they fail to do justice to the fact that God has spoken.

Far from rejecting the ideas of the newer sciences and philosophies, Bavinck sought to learn from them while never compromising his own Christian confession. In this way, he is an exemplar to the church in every age, including our own, which needs to wrestle with new questions. In our own times, new issues surrounding race, gender, and culture are cropping up, and Bavinck’s own nuance and patience models for us the way forward. If Bavinck was able to critically appropriate the newer findings in romantic philosophy and the psychology of the unconscious life in his own day, how might we critically appropriate the newer findings of our own times?

Another perceived binary that Bavinck navigates beyond is that tension between the church and the world. To be sure, the church is a transcendent good; a spiritual kingdom of God that is in antithesis with the principalities of the world. Yet to be distinct from the world is not to be confused with a separatist principle that wants to depart from the world. The church, then, is both a pearl—beautiful and an end in itself—and a leavening agent. The gospel unites us to Christ and renews human beings, but precisely as it renews human beings, it transforms their engagements with the world.

This is powerfully presented in his address, “The Catholicity of Christianity and the Church,” in which Bavinck doesn’t merely expound catholicity as a unifying principle, where the church in every generation joins together with the whole catholic church in the past, but he sees catholicity as a leavening principle. The lecture concerns catholicity (“according to the whole”), so we need to comprehend his concern that grace concerns all of nature. In a letter to Snouck Hurgronje on his intentions for the address, he wrote: “Imagine with this lecture that this is primarily intended as a medicine for the separatist and sectarian tendencies that sometimes appear in our church. There is so much narrow-mindedness, so much pettiness among us, and the worst thing is that this is regarded as piety.”[1]

One reason that Bavinck is gaining so much traction today is this gnawing awareness that the church moves back and forth between that narrow-mindedness and uncritical assimilation. On the one hand, we are so mired in culture wars that we forget our spiritual calling, or, on the other, we mimic the world in the attempt to be relevant. It is a difficult task, indeed, to resist that narrow-mindedness disguised as piety, and to hold onto the unchanging truths of Scripture. Yet this is exactly what Bavinck sought to do, and why he is an exemplar to us.

A theme in all of Bavinck’s writings on knowledge is the connection between subjects and objects. How do the ideas in my mind correspond to the world outside of the mind? And how can we do justice to the inevitably subjective character of our knowing, and the absolute character of the truth outside of us? Having recently translated Bavinck’s Christian Scholarship (Christelijke wetenschap) (Crossway, forthcoming)—a companion volume to his Christian Worldview (Crossway, 2019)—I found this was one of the questions that he sought to answer. Our contemporary age sees life divided in two: into realms of pure subjectivity (faith) and pure presupposition-less objectivity (science). In response, Bavinck argued this way:

There is no contradiction whatsoever in the idea that the absolute exists, and that we have only a relative knowledge (kennis) of it. The relative does not become absolute because we might eventually know (kennen) it absolutely and fully, and the absolute does not become relative because we know (kennen) it merely in a relative, limited, and defective sense. As long as one does not mean to deny the existence of the absolute, one cannot put too much emphasis on the relativity of our knowledge. What we really know is minor in content and small in scope. Kant and Comte have made us deeply aware of this. They have failed, as scholastics sometimes have, in that they have tried to draw a sharp geometrical line between what could be precisely known and what could be believed on subjective grounds. There is no such boundary. Thus, the world cannot be divided into two halves, nor can humanity be divided into two persons.[2]

What Bavinck is saying here deserves more unpacking than space allows—and my own work has sought to explore these issues in greater detail[3]—but notice his basic point: there is no sharp boundary between the subjective and the objective. At every point of our living and knowing, the subjective is fully engaged, and the objective is that which is approximated. In our knowing, just as in our living, we must embrace our finitude. And this cuts across both the church and the world. The world is mistaken insofar as it considers theology to be sequestered to the realm of private opinion, with science and reason occupying the realm of public and objective knowledge. It fails to consider that the subject’s world and life view, too, is involved in our simplest perception of visible things, and that theology has to do with an objective revelation. But the church, too, should heed this—the truth of God never changes, but we see through a glass dimly, and our contexts, selves, and upbringings mean we need to receive and re-express those truths afresh. We are never as pure as we think in our reception of the truth, and at times this lack of self-awareness has led to great harm by failing to diagnose idolatrous prejudices. In the contemporary trends of “exvangelical” and “deconstruction” narratives, Bavinck shows us how one can be a Reformed theologian and still seek to do justice to issues of the subjective life.

Bavinck’s voice remains relevant because he helps us move beyond these perceived binaries. For the church in the 21st century—even more aware of the tensions that Bavinck already felt a century ago—his voice is a beacon. As pilgrims along the way, we need help in walking this line. 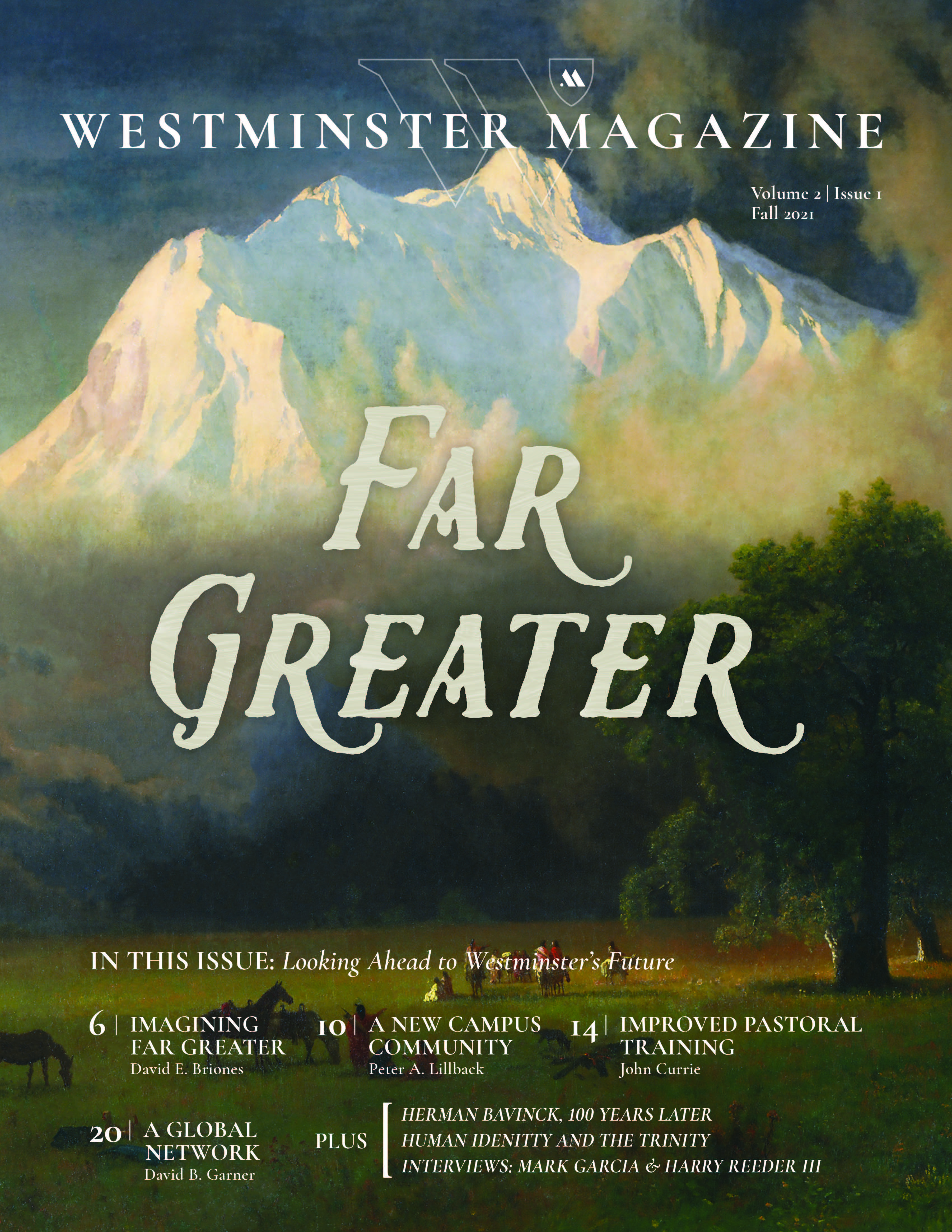 This article was first presented in 1942 at Westminster Theological Seminary's "The Christian World Order" conference.

A Theology of the Body for Protestants

Jared Eckert reviews Sam Allberry's 'What God Has to Say About our Bodies: How the Gospel is Good News for Our Physical Selves'
Back to issueall issues

Partner with Westminster Theological Seminary and our mission

Get Westminster Magazine delivered to your inbox

Thank you! Your submission has been received!
Oops! Something went wrong while submitting the form.